Blood cancers account for 6% of all cancer cases. Here is how they can be treated with Western and alternative medicines. 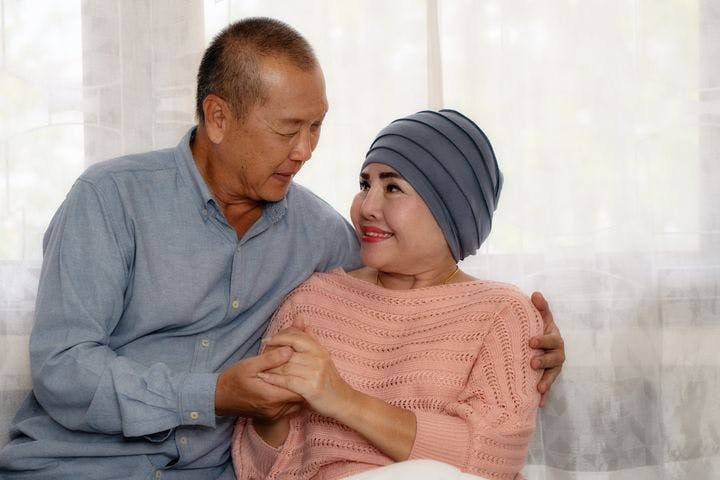 Blood cancers total 1.24 million cases of all cancer cases worldwide annually. Two of the most common types in Malaysia are leukaemia and lymphoma.

Though they are caused by abnormally multiplying body cells, blood cancers differ from solid tumour cancers that spread to distant places only in advanced stages. In blood cancers, abnormal cells occur in a liquid and flow throughout the body.

Being diagnosed with blood cancer is an emotional and turbulent journey for patients and their loved ones. Fortunately, recent advancements in modern medicine and new therapies have improved its prognosis.

Blood cancers, just like other cancers, occur when cells in the blood marrow start multiplying erratically. This prevents normal bone marrow cells from developing and performing their functions. There are three main types of blood cancers:

Factors That Can Cause Blood Cancer

Like many other cancers, blood cancers are believed to develop from genetic and environmental factors. It has been observed that smoking and exposure to radiation and certain chemicals are associated with an increased risk. Infection with the Epstein-Barr Virus, HIV and human T-cell lymphoma/leukaemia virus also increases the risk of developing blood cancers.

According to Chief TCM Physician Chu I Ta, the causes of blood cancers include genetic or congenital , emotional disorders, and . These result in the weakening of immunity and Qi and Blood . An imbalance of the zang-fu organs (脏腑) causes Heat Toxicity, which affects the bone marrow, leading to blood cancer.

“Though the disease is located in the bone marrow, it is related to dysfunctions of the , Kidneys and Heart. The key factors leading to disease are a toxic attack on the bone marrow, blood and bone marrow damage, and Excess Heat burning yin, resulting in fever and bleeding symptoms”, explains Physician Chu.

“In this case, the pathogenic factors are congenital Deficiency, Deficiency of Zang-Fu organs, invasion of six exogenous factors and the damage of seven emotions”, says Physician Chu. These allow the penetration of toxins and damage the blood and bone marrow, resulting in qi and blood disorders. The pathogenesis of the disease is due to the collision of qi, blood, phlegm and Heat.

The symptoms of blood cancer include fever, chills, fatigue, weakness, bone and and weight loss. Blood cancers used to have a very poor prognosis in the past. But due to advances in modern-day medicine, several therapies have improved the outlook for patients considerably.

The treatment of blood cancers in Western medicine depends on the type of blood cancer and how far it has spread in the body. Medical practitioners usually prescribe one or a combination of the following treatments:

TCM has several remedies that can support and augment the effects of Western medicine. Physician Chu explains TCM treatment for leukaemia is administered at different stages: before, during, and after chemotherapy.

The treatment in TCM depends on identifying the syndrome type and customising the therapy based on the unique body constitution of each patient. That’s why it’s important to consult a licensed TCM practitioner and not self-medicate with over-the-counter medicines.

Before treatment beings, patients may be diagnosed with the following syndromes. TCM suggests the decoctions that can help with symptoms:

During chemotherapy, it is common for patients to suffer from the side effects of toxic drugs, which can hamper treatments. Common side effects experienced by patients include nausea, vomiting, diarrhoea, poor appetite, and jaundice. A TCM physician can identify the associated syndrome and treat it accordingly, helping the patient withstand the toxic effects of the chemotherapeutic drugs.

Chemotherapy drugs attack and kill the body’s normal cells in addition to cancer cells. Because of this, blood cell production is usually hampered after chemotherapy. According to Physician Chu, the principle treatment of TCM at this stage is focused on reinforcing vital qi and restoring the functions of all organs.

Physician Chu suggests the following remedies to revitalise the vital organs, which are the Kidneys, Liver and Spleen:

Blood cancers now have a better prognosis than ever before. With the wealth of knowledge gained over the years in traditional and Western medicine, patients can overcome the condition and enjoy a good However, it’s necessary to seek consultation from an oncology-trained physician for a suitable herbal formula to support cancer treatment.

Digital eye strain is unavoidable these days. Yet, we can still try protecting our eye health with nutrition, supplements and good habits.

Hot Weather Focus: Tips on How to Stay Hydrated

Excessive heat can lead to exhaustion, cramps and dehydration. Find out how to stay hydrated, especially in the hot Malaysian weather.

It’s easy to associate sleep paralysis with the supernatural. It begs the question: is it an otherworldly experience or a treatable health condition?

Your Hormones are Changing Your Body Shape. Here’s How to Take Control of Them

Sometimes, a woman’s body shape is altered by hormones. By balancing your hormones, you can change your body shape and achieve overall health at the same time.

Do You Need an STI Test? Find Out Which One to Take

Sexually transmitted infections (STIs) have different symptoms. An STI test will enable you to identify the condition and get the right treatment.