Reviewed by Dr Jessica Gunawan and Physician Vong U Chan 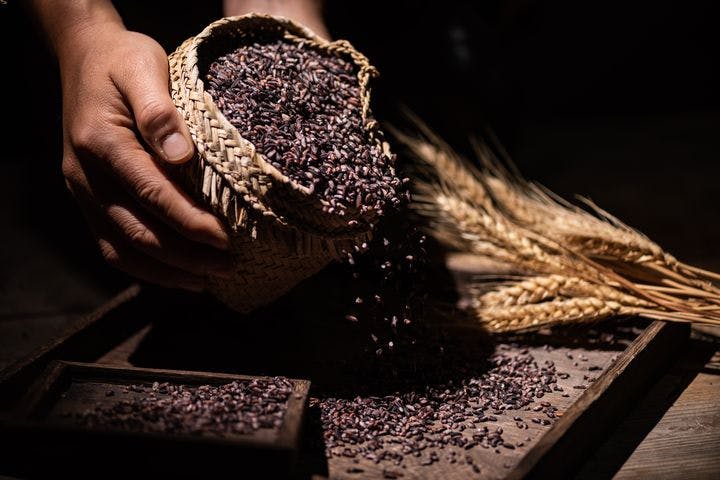 In recent times, different colours have been perceived as the “new black” in fashion. These colours were becoming more in demand than black, which was the epitome of chic. In like manner, black is the new green for healthy food choices! Black foods – black rice, lentils and sesame seeds – have a naturally darker shade due to the presence of plant pigments called anthocyanins.

In addition, these foods are tasty and boast various health benefits. Here are some of the advantages of including dark-coloured foods in your diet.

In the Five Element Theory of Traditional Chinese Medicine (TCM), each element relates to a natural aspect. These aspects are colour, taste, emotions, seasons, sensory organs, and yin (passive energy) and yang (active energy) organs. The Water element is associated with the Kidneys. Subsequently, the Kidneys connect to the colour black. Hence, black-coloured foods are believed to have a direct effect on the organ system.

“The Kidney is responsible for storing jing (essence), which determines our health and vitality. It also governs birth, growth, reproduction and sexual health. As such, it’s important to ensure that our Kidneys are healthy and functioning optimally. Consuming black-coloured foods can strengthen the organs and protect them,” explains Eu Yan Sang Physician Vong U Chan.

A native of Southeast Asian cuisine, you can also mix it with white rice or other grains to balance out its flavour and texture. The fibre in black rice is especially helpful in preventing bloating, constipation and other digestive disorders. It’s abundant with vitamin E, which can fend off cell damage and boost the immune system.

It’s also capable of metabolising cholesterol and lipids, and inhibiting tyrosinase from triggering skin diseases. Separately, physicians use black rice in TCM to nourish the Spleen, strengthen the Liver and Kidneys, regulate a person’s appetite, and improve vision and blood circulation.

Dark-coloured lentils are low-fat but have high amounts of fibre. The fibre content of this ingredient can aid weight management by suppressing appetite. Meanwhile, the tannins – a type of phytochemical – in black lentils may halt the growth of cancer cells. It’s also a healthy source of:

The consumption of one cup of black lentils can have a remarkable effect on regulating cholesterol, triglyceride, and blood sugar levels.

Black garlic has a sweet, syrup-like taste. It also has hints of tamarind or balsamic vinegar. To achieve this unique combination of flavours, the ingredient it’s fermented in a controlled environment over several weeks. Though, it’s not only highly sought after for its ability to enhance the taste of dishes like Bak Kut Teh, but also for its therapeutic benefits.

This versatile ingredient can be used in baked goods like mooncakes or combined with oats and milk to prepare a breakfast meal. Black sesame seeds are rich in calcium, magnesium, vitamin B1 (thiamine) and dietary fibres.

It has many medicinal uses and plays a significant role in lowering a person’s risk of cardiovascular conditions. Black sesame seeds also have protective effects on the kidneys, and against neurodegeneration, osteoporosis and chronic liver injury. Studies also exhibit the antioxidant, anti-ageing, anti-cancer, anti-inflammatory, anti-tumour properties of the ingredient.

According to Physician Vong, she often uses black sesame seeds in her clinical practice. She prescribes the ingredient to patients who present with constipation and Blood Deficiency. As black sesame seeds are mild in nature, they also have the ability to nourish blood and lubricate the Intestines, plus helping with premature greying of hair.

Also known as wood ear or Judas’s ear, black fungus is an edible mushroom. You can turn it into a side dish by blanching and seasoning it with other condiments. The ingredient is overflowing with nutrients like calcium, iron, and vitamins B1, B2 (riboflavin), D and K.

TCM favours the use of black fungus for its ability to promote positive emotions and treat liver, lung and stomach conditions. It can also help avert haemorrhoids, remedy dryness, encourage blood circulation and reduce cholesterol levels.

You can eat black rice and dark-coloured foods daily. However, it’s necessary to moderate the amount consumed. Do speak to a TCM practitioner if you’re unsure about the suitability of specific ingredients, particularly if you experience symptoms like diarrhoea after consumption.

Asparagus: 5 Reasons Why You Should Eat This Superfood

A great source of nutrients, asparagus has been lauded for its many health benefits. Discover how this superfood can improve your health.

Healthy Diet: 5 Tips to Lose Weight and Keep It Off

There’s no reason to starve yourself to lose weight. This article will explain how to have a healthy diet to shed off those extra kilos.

7 Cordyceps Benefits for Your Health and Well-Being

Himalayan Salt: Is It Really Better Than Common Table Salt?

This article describes the health benefits of Himalayan salt and how it is compared to common table salt.