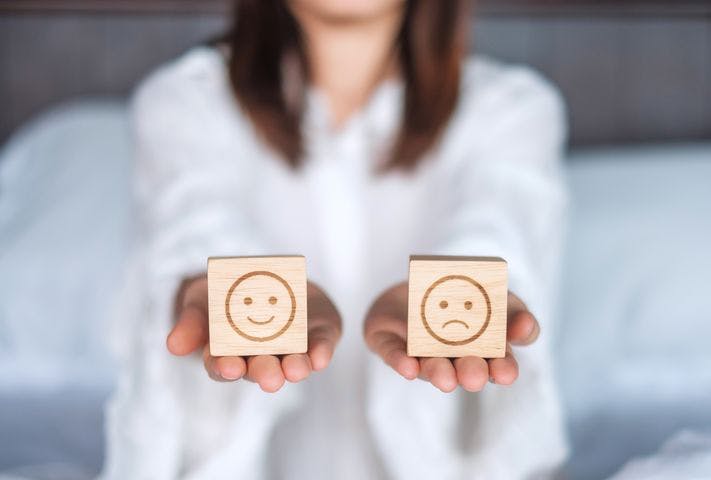 Emotions are a part of being human. But it’s important to know how to control emotions so we don’t feel overwhelmed by extreme feelings to the point of becoming ill. Conversely, internal health imbalances can sometimes be the cause of our emotional disturbance. This is a key aspect of holistic medicine as taught in Traditional Chinese Medicine (TCM). Our body and the state of our mental and emotional health are separate from each other.

The Relationship Between Physical Health and Emotions in TCM

TCM physician Lim Sock Ling explains that in TCM, each of the five organ systems associate with a particular emotion. Anger is associated with the Liver, fear with the Kidneys, joy with the Heart, sadness and grief with the Lungs, and worry with the Spleen.

In some cultures, languages use certain organs as a figure of speech. For example, in English, we are familiar with “heartbreak” or “heartache”. Great examples from Malaysia include the Malay expression of anger or resentment, literally being “liver pain” (sakit hati), as well as the fact that the Chinese word for “heart” (心) is used for the word “mind”.

“For example, the Liver plays an important role in regulating emotions attributed by its role in qi (life force) circulation. Hence, Liver imbalance can lead to poor qi regulation among other organs and cause you to lose control over your emotions. This could for example, manifest as depression. In turn, depression itself can be a symptom of or a contributing cause of Liver dysfunction. A person with such a condition finds it difficult to find joy, and tends to be worrisome and down,” she further elaborates. The Heart is another important organ in emotional regulation because it contains shen or spirit. If this organ system is compromised, an unstable and depressed mood can be the result.

When it comes to reproductive development and aging, it is especially common for women to experience this connection between emotions and changes in the organ system. Many women experience irritability as part of premenstrual syndrome (PMS). This is not surprising since Liver, associated with anger, also regulates menstruation. For women around the menopausal age of 49, declining Liver and Kidney essence can not only show up in physical symptoms such as hot flushes, but also extreme emotional mood swings that can sometimes feel uncontrollable.

Other Conditions Linked to Emotions

In TCM, there are other conditions associated with emotional dysregulation. These include:

How to Control Emotions

In today’s society, there is one thing that nearly every adult, and increasingly even children, have in common – stress. “To regulate emotions, one should ensure optimal qi (vital life force) circulation among the five viscera. As it turns out, stress is one cause of qi stagnation,” physician Lim shares.

Managing your stress is how to control emotions. Be mindful of how much you take on to begin with. And when stress starts to be too much, learn to recognise the tell-tale signs and how to regulate it with these methods:

Acupuncture is often the first line of treatment TCM prescribes for many ailments, including emotional disturbances. Needles are placed at specific points on different meridians. “Acupuncture helps circulate qi which can improve emotions related to qi stagnation such as depression,” physician Lim explains.

A recent eight-week acupuncture study by researchers in China, South Korea, and the United States showed that depression treated with both anti-depressants and acupuncture yielded significantly better result than medication alone. Another study by Harvard Medical School also found that acupuncture is an effective treatment for depression and anxiety in pregnant women.

Based on each individual’s needs you can choose acupressure, which is similar in principle to acupuncture . “To regulate Liver qi, you can massage the Tai chong (LR3, 太沖) acupoint. It is located at the depression distal to the junction of the first and second metatarsal bones,” physician Lim says.

Herbs in TCM to control emotions

Other herbs include rose buds, and finger citron, and wild American ginseng. “Silktree bark is also a great herb that acts on the Heart and Liver meridians. It is sweet in taste and neutral in nature, functions to remove stagnation, harmonise blood, calm the Heart and resolve swelling. People with insomnia, and when one is under the weather often use this,” physician Lim explains. However, she also cautions that many of these herbs have contraindications for pregnant women or those with certain medical conditions. It is critical that you work with a registered TCM practitioner.

There is great freedom in learning how to control emotions, rather than being prisoner to them. Recognise that this is not a flaw or weakness, but an imbalance that our busy lives can cause. Fortunately, with TCM, there is a clear path to peace and wellness again.

Anxiety Test: What Type are You Experiencing?

Take this short quiz to help you identify your anxiety disorder. Then you can learn the steps to take to manage the condition effectively.

Quiz: Are You Showing Signs of Depression? Find Out Now

Early diagnosis can help you find joy in life again. Find out if you are experiencing the signs of depression and what you can do about it.