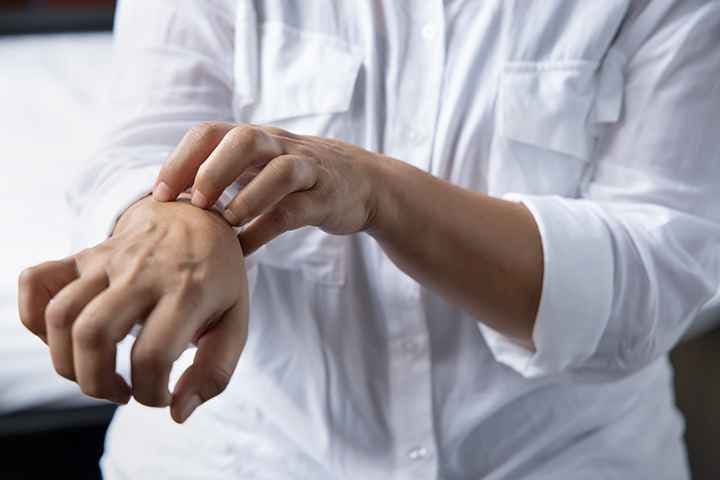 What is scabies? The answer may evoke images of a microscopic parasitic bug and skin sores among communities steeped in poverty. In reality, scabies is a common skin rash that can happen anywhere. According to a 2010 study in Sarawak, 8.1% of students in boarding schools and 46% of occupants in Penang welfare centres were infected with this skin infestation.

The body’s immune response to the parasitic human itch mite called Sarcoptes scabiei var. hominis causes scabies. Once infestation begins, it can take as long as four to eight weeks for the immune response to develop and for symptoms to appear. Crusted scabies (also known as “Norwegian scabies”) is the more severe and highly contagious form of this condition. It typically inflicts individuals with compromised immunity, resulting in the formation of thick crusts, housing thousands of mites and eggs.

Prolonged skin-to-skin contact can spread scabies as it allows the mites to jump from one human host to another. Therefore, crowded settings like nursing homes and day-care centres run the risk of an outbreak the moment there is even just one infested person.

Symptoms: How to Identify Scabies

The primary symptoms of scabies are skin rashes and intense itching. The rash typically appears around skin folds between the fingers, wrists, inside the elbows and knees, under the breasts and nipples, genitals, and other parts of the body.

In young children, scabies rash may also appear in the soles of the feet, palms, and scalp. When examined carefully, the tunnels created by the mite appear as thin, raised, irregular lines.

Itching due to scabies gets worse at night. Intense and vigorous scratching often leads to further inflammation, breaking the skin and increasing the risk for skin infections. Impetigo is a common secondary bacterial infection in some cases, usually caused by the staphylococci or streptococci bacteria.

You can mistake scabies rash for other skin conditions such as eczema or psoriasis, so it’s important to get a clear confirmation. Diagnosis of scabies is usually through observation of the symptoms such as the rash, itching, and appearance of burrows. Doctors will ask patients about activities in the past weeks to ascertain where they might have caught the parasite.

Upon diagnosis, your doctor will prescribe medication that will kill the mites and their eggs. These scabies treatments, also called scabicides, are topical creams or ointments that contain permethrin, malathion, benzyl benzoate, lindane, crotamiton, or sulphur.

Patients must put the topical medicine all over the body, left on for the recommended amount of time, and then reapply as directed by a physician. Sometimes the physician may also prescribe the oral medication ivermectin. If a secondary bacterial infection is present, antibiotics will be part of the treatment as well. An infected person may also choose to take antihistamines to reduce the intense itching and help them sleep.

Failure to seek treatment can greatly decrease the quality of life and can progress to the more severe crusted or Norwegian scabies, which is even more contagious. Untreated secondary bacterial infections can also be deadly and lead to other medical complications involving crucial organs such as the kidney.

In Traditional Chinese Medicine (TCM), skin disorders are usually a sign of the body’s inability to get rid of pathogens. With scabies, pathogens include mites, eggs, and faecal matter buried in the outer layers of the skin. Inflammation of the skin is a sign of heat, while wet, oozing pustules indicate dampness, and itching indicates wind.

A well-known topical decoction for treating scabies is the Ku Shen Tang Gao, which consists of several different TCM herbs like Ku Shen (sophora root), She Chuang Zi (cnidium fruit), and Di Fu Zi (kochiae fruit) that attack the parasitic pathogens as well as rebalance these excess elements. Numerous studies have shown that these herbs provide anti-inflammatory and anti-itching relief for skin conditions such as scabies. Topical application essential oils made from lemongrass could also be beneficial.

According to physician Kong, improving skin health following scabies requires maintaining a lighter diet. This includes the consumption of more fruits and vegetables as well as cooling foods. He also recommends avoiding alcohol, beer and spices like chili.

What is scabies and how do you treat and prevent it? The best defence is of course avoiding infestation in the first place, so be sure to keep proper hygiene and maintain a healthy immune system to help fight any parasitic infestation.

This is an adaptation of an article, “疥疮 (Scabies)”, which first appeared on Health123 website.

Secondary Hypertension and How to Manage the Condition

Unlike primary hypertension, secondary hypertension has a known cause. Physicians will only diagnose the condition if a person meets certain criteria.

Sometimes All We Need is the Air We Breathe: The Role of Healthy Lungs in Optimal Wellness and Beauty

Treat your lungs as good as they've treated you. Understand the importance of healthy lungs for our lives and make sure you keep them well.

What is Hypertension? These Facts Will Help You Understand the Condition Better

Untreated elevated blood pressure is harmful to your overall health. Discover facts, risks, and how you can effectively manage hypertension.

Acute myocardial infarction is a life-threatening condition. Rehabilitation can help lower the risk of experiencing another attack in the future.