Why You Get the Asian Flush When You Drink Alcohol

Sign of alcohol intolerance, good blood circulation or something else? Find out why the cause of the Asian flush when you drink might be harmful to your health. 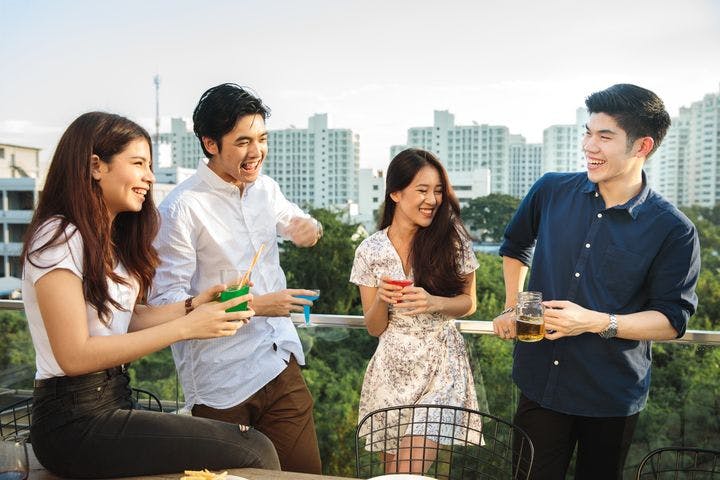 You’ve probably heard of the Asian flush before. It’s a term for the redness that appears on the faces, necks and bodies of some alcohol drinkers. Curiously, this mostly happens to people of East Asian descent, hence the name.

There’s a suggestion that the flush indicates alcohol intolerance and that it will disappear on its own once the affected people are used to drinking. As a result, this can drive them to drink more. This notion can’t be further from the truth. In fact, drinking excessively can put people with the Asian flush in danger.

What’s the cause of the Asian flush and are there ways to treat it? Let’s find out!

Causes of the Asian Flush Reaction

The word “glow” usually has a positive connotation, but this isn’t the case with the Asian glow. Some think it’s related to alcohol intolerance, while others believe it’s a sign of well-working blood circulation.

On the contrary, the real cause behind the Asian flush reaction is related to a ADH or ALDH liver enzyme deficiency. When someone consumes alcohol, changes will occur in the body. Alcohol is usually absorbed through the gastrointestinal tract, before entering the blood and metabolised in the liver.

The metabolisation process requires two types of enzymes. Firstly, the ADH enzyme converts ethanol (the type of alcohol in alcoholic beverages) into acetaldehyde. The other is the ALDH enzyme, which converts acetaldehyde to acetic acid before it’s eventually turned into carbon dioxide and water.

Approximately 8% of the world’s population, or about 560 million people were born with genetic mutations of the ALDH enzyme. These mutated genes are unable to fully metabolise ethanol. The half-finished metabolisation process then leads to acetaldehyde accumulation, which later triggers the Asian flush.

According to Traditional Chinese Medicine (TCM), alcohol creates imbalances within the Liver and gall bladder organ systems because the Liver is the organ that metabolises and clears the blood of alcohol. Excessive alcohol intake can create a combination of excessive Dampness and Heat, impeding the flow of qi and blood throughout the body. This creates disharmony, with the other organ systems in the body.

A healthy liver is important as it promotes healthy absorption and digestion. The Liver ensures positive circulation of blood, bodily fluids, and qi, and regulates essential substances in the body.

Drinking alcohol can affect you negatively in the form of headaches, reflux or indigestion, inconsistent bowel motions, poor sleep and lethargy.

Commonly found in the East Asian population, this condition is most prevalent in Taiwanese people (45% to 47%), according to a 2019 report. The same data also revealed that the mutation appears in 35% of mainland Chinese people, 30% of Japanese, and 20% of Koreans.

In 2010, led by a geneticist at the Kunming Institute of Zoology in China, a team of researchers tried to determine the origin of the ALDH gene deficiency. They concluded from their research that the mutation began between 2,000 to 3,000 years ago in the ancient Pai-Yuei or Baiyue tribe in China. This tribe was thought to be the origins of HEMUDU culture, rice farming and tea. The researchers theorised that the mutated genes of these early rice farmers discouraged them from alcohol overconsumption and helped preserved the surplus of rice.

Complications of the Asian Flush Reaction

More than just a red face and neck, a build-up of acetaldehyde can lead to further damage, including:

The oral region comprising the throat, vocal cords, and oesophagus of alcohol drinkers are constantly exposed to acetaldehyde. Since individuals with ADH or ALDH deficiency cannot metabolise acetaldehyde entirely, they’d be more at risk for oesophageal cancer.

Moreover, because of ethanol’s cancer-causing properties, people who have the Asian flush also have a higher chance of suffering from breast cancer and colorectal cancer.

A 12-year study in Korea saw a team of researchers observe moderate and heavy alcohol consumption in people. They concluded that heavy drinking can increase the risk of hypertension in those suffering from the Asian flush.

A 2019 study by researchers at Standford University found that those with the mutated ALDH2 cells had a greater increase of cell damage and a greater risk of Alzheimer’s onset and progression.

How to Manage the Asian Flush Reaction

Three things can help with the Asian flush reaction:

From TCM’s point of view, excessive alcohol results in an accumulation of Dampness and Heat in the body. This disrupts the flow of qi (vital energy) and blood circulation, as well as the functions of different organs in the body, causing hangover symptoms.

To manage the effects of excess alcohol, TCM recommends consuming Heat-clearing foods or beverages. They include mung bean (lu dou, 绿豆), liquorice root (gan cao, 甘草), and vinegar drinks. Vinegar drinks are believed to sober you up quicker and help your body neutralise the alcohol.

If you’re looking to boost Liver function, some herbs to include in your diet are ginger (jiang, 姜), which nourishes blood and helps your body get rid of toxins with its antibiotic and antibacterial effects, and turmeric (jiang huang, 姜黄), which is known to be Liver-cleansing and clears body Heat. Another detoxifying herb is dandelion root (pu gong ying, 蒲公英), which can cool blood and nourish Liver.

Try massaging the acupoint tai chong (LR3, 太冲) for three to five minutes to nourish Liver yin, and balance, tonify, or disperse Stagnant Liver energy. It can alleviate headaches, dizziness, and detoxification and have a calming effect on the nervous system to alleviate insomnia, irritability, stress, and anxiety.

Some people were born with the Asian flush and therefore can’t escape the health risks it can bring. But it doesn’t mean that you can’t do something about it. Know your limit and enjoy your drinks in moderation.

This is an adaptation of an article, “为什么有些人喝酒后会脸红?”, which first appeared on the Health123 website.

Why You are Experiencing Blurred Vision

Blurred vision is a symptom of different eye disorders. Discover ways to treat underlying causes to allow you to see clearly in this article.

Dengue Fever Symptoms: How to Ease Them Naturally

In addition to medical intervention, address dengue fever symptoms with these natural remedies to help your body fight and recover.

The Relationship Between Scleroderma and Gastroesophageal Reflux Disease

Does scleroderma trigger gastroesophageal reflux disease? Learn how it affects the gastrointestinal tract and ways to manage the disease holistically.

Prostate cancer is a common cancer in elderly men. Understand the stages of prostate cancer and how traditional remedies can support the treatment.

Malnutrition Diseases in Children: 3 Ways to Treat the Symptoms

Millions of children around the world suffer from malnutrition diseases. In 2019, 20.7% of Malaysian children under five were found to be malnourished.