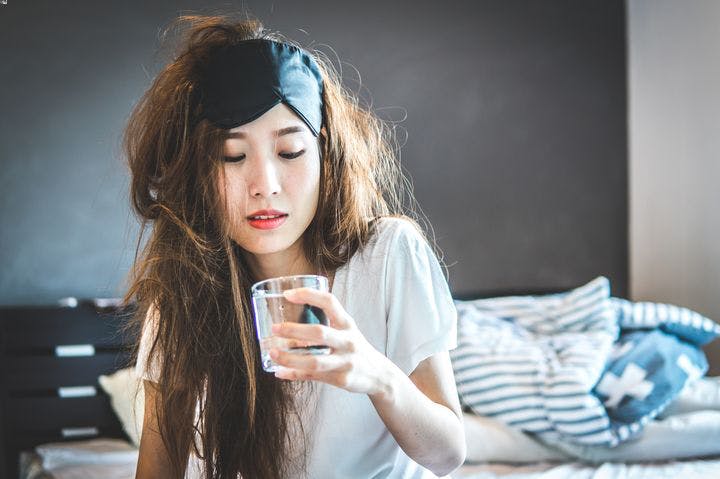 Malaysians might be in need of a hangover cure more than you’d think. According to the National Health and Morbidity Survey 2019 by the Institute for Public Health, 45.8% of alcohol consumers in Malaysia engage in binge drinking. The number is almost double that of other countries, like the United Kingdom (27%) and Indonesia (29%).

The survey claims that more than half of the Malaysian drinkers do it excessively. This means that a lot, if not all of them, might wake up in the morning with hangovers after a night of drinking.

Simple browsing on the internet would give you varying results on the remedies to cure hangover symptoms, but which one is the best? We delve deeper into the origin of alcohol hangovers from the perspectives of Western medicine and Traditional Chinese Medicine (TCM). We will try getting to know more about hangovers to learn how to cure or even avoid them altogether.

The Cause of Hangovers

Hangovers are a series of side effects that a person gets from alcohol consumption. The actual cause of hangovers is still up to debate. Even scientists are still unsure why alcohol hangovers exist in the first place. There are some theories, but so far, the most compelling one involves ethanol and/or a chemical called acetaldehyde.

It is said that when a person drinks, the ethanol (a type of alcohol in the alcohol you drink) travels to the liver, where it’s metabolized by the enzyme alcohol dehydrogenase (ADH). The process creates a toxic by-product, which is acetaldehyde. Either ethanol or acetaldehyde is believed to be responsible for triggering hangover symptoms.

Studies suggest that the quicker ethanol gets conversed into acetaldehyde, the less severe the hangover is.

From TCM’s point of view, excessive intake of alcohol results in an accumulation of dampness and heat in the body. This disrupts the flow of ‘qi‘ (vital energy) and blood circulation, as well as the functions of different organs in the body, causing hangover symptoms.

Typically, people with hangovers will experience:

The intensity of the symptoms that appear depends on the drinker. For example, women tend to experience hangovers more than men because they generally weigh less.

And you’ve probably heard of the term “Asian flush”. The condition is more than a mere myth, as it has been scientifically proven. A study conducted on Japanese workers discovered that participants with the mutated gene aldehyde dehydrogenase-2 (ALDH2*2) have worse hangovers. This mutation also causes many Asian descents to flush when drinking too much.

Some alcohol beverages are known to stimulate worse symptoms because they contain more congeners, the chemicals that may worsen the toxic effects of ethanol. Although, scientists have yet to connect a specific one with causing a hangover.

For instance, bourbon, whiskey, red wine, brandy and tequila may give you a more severe impact than gin and vodka.

There are some ways to prevent getting a hangover:

If you still wake up with hangover symptoms, the only proven cure is ibuprofen or aspirin to reduce headaches, muscle pain, etc. The use of paracetamol is not advised.

TCM offers a cure that focuses on clearing the alcohol-induced excess heat from the body. Each hangover has a different impact on a different person, but TCM physicians commonly recommend the following remedies:

The two herbs are known to get rid of heat and toxins. Furthermore, mung bean promotes urination. They can be cooked together or consumed individually. Liquorice root, for instance, is available as tea.

Vinegar drinks may help a person get sober quicker and neutralize the alcohol in the body.

TCM thinks some fruits and vegetables can help remove the toxin from the alcohol. They are:

Just like there’s still no exact science behind alcohol hangover, there’s no definite remedy to treat the symptoms. Every hangover cure should work differently on each person, and you might need several tries before you find the right one for you. Better yet, you can prevent hangovers by knowing your limit and not drinking alcohol more than you can take.

This is an adaptation of an article, “Chase Away Hangover Blues With TCM”, which first appeared on the Eu Yan Sang website.

5 Things to Know about Tuina

Tuina has gained popularity worldwide. We will reveal the five things everyone needs to know about this ancient Chinese massage.

The Truth Behind GM Diet and Other Popular Eating Regimes

One of the lesser-known effects of obesity is vision loss. Find out how you can maintain a healthy weight and protect your eyes at the same time!

Fall Sick Easily When Travelling? You May Have a Weak Immune System

If you catch colds and have an upset stomach frequently when travelling, you might have a weak immune system. Find the causes and how to protect yourself.