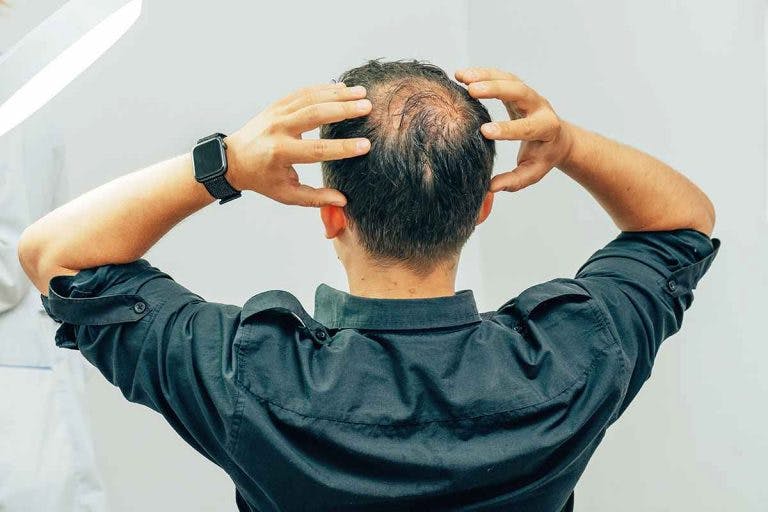 Contrary to popular belief, hair loss is normal. Everyone loses an average of 50-100 strands of hair daily. However, a condition called androgenetic alopecia (better known as male pattern baldness) can cause a receding hairline for 80% of men with noticeably thinning hair. This condition can occur in some men as early as the age of 20. Old age and underlying health issues can exacerbate the condition, speeding up the rate of hair loss. As a result, many men may not only end up going bald but suffer a loss of confidence and self-esteem as well.

So how to reverse male pattern baldness effectively?

Here are a few of the common causes of the condition and ways to address receding hairline naturally.

Genetics directly influences a man’s sensitivity towards dihydrotestosterone (DHT) — a type of testosterone hormone that increases after puberty. DHT can cause hair follicles to shrink, resulting in strands that grow back finer, shorter and thinner.

In the long run, it’ll take hair much longer to grow back until eventually, these follicles will cease to produce new hair altogether, leaving the scalp barren.

Traditional Chinese Medicine (TCM) believes a person’s hair health relates directly to their internal organs’ health. According to TCM physician Lim Sock Ling, a common cause of hair loss in men is from “an accumulation of dampness and heat in the spleen and stagnant qi (life force) in the liver.” When this happens, blood flow to the head will decrease, resulting in inadequate nourishment for the hair.

Also, the health and abundance of a person’s hair link directly to kidney essence (jing). As such, a weakness of the kidneys can also lead to hair loss and grey hair.

The insertion of thin needles into the bald areas of a person’s scalp can be beneficial for increasing blood flow and improving blood circulation to the head. Studies have shown that acupuncture inhibits DHT formation, which helps in preventing hair loss.

“Prescriptions usually include herbs to remove dampness and heat or nourish blood and improve qi circulation,” explains Physician Lim. For instance, the consumption of a herbal soup known as si wu tang is especially effective when we combine its four ingredients. White peony (Bai shao) and Rehmania root shu di huang can nourish the blood, whereas chuan xiong and danggui can regulate blood and qi. Beverages like chamomile or rosebud tea may also help improve blood circulation.

“The patient should also avoid alcohol and foods that are cold, fried, spicy or sweet,” says physician Lim. She adds these foods can impede the spleen’s function and ability to transport fluids, allowing dampness and heat to accumulate.

A balanced diet that consists of foods like fish, meat, beans, and eggs are good for hair health. In the same way, foods rich in iodine — kelp and seaweed — are critically important to ensure the normal functioning of the thyroid gland and the healthy production of thyroid hormones.

Conversely, hypothyroidism and hyperthyroidism — insufficient or excess amounts of thyroid hormones, respectively — can cause hair loss. This hair loss is diffused and likely to involve the entire scalp. A person’s hair will also appear to be uniformly sparse.

Vitamin E, too, is equally important for healthy hair growth. Tocotrienols, a group of chemicals from the vitamin E family, can help reduce lipid peroxidation and oxidative stress in the scalp, which can trigger the onset of alopecia. Examples of food that are rich in vitamin E are celery, spinach, and black sesame seeds.

We can also reverse male pattern baldness optimally through the conjunctive use of traditional remedies and lifestyle changes. Physician Lim deduces, “We cannot reverse hair loss due to genetics, but changing habits and addressing root causes which may be causing premature hair loss is certainly possible.”

This is an adaptation of an article, “The Bald Truth”, which first appeared on Eu Yan Sang website.

3 Millennials Share Their Korean Diet for Clear Skin: You Can Start Today!

We interview some people who follow the Korean diet to get clear skin. Are you interested in following this trend as well?

Discover These 5 Herbs for Skin Nourishment

Our skin mirrors what is happening inside the body. This article shares a list of TCM herbs that can help nourish the skin from within.

Managing Menopause Symptoms: You Don’t Have to Suffer in Silence

This article will help figure out if someone may be going through menopause and if it’s time to seek professional help with managing the symptoms.

Are Varicose Veins Dangerous? Here’s How to Treat It

Varicose veins are not a cosmetic problem. Instead, it’s a condition that’s indicative of more serious disorders.