Fall Sick Easily When Travelling? You May Have a Weak Immune System

If you catch colds and have an upset stomach frequently when travelling, you might have a weak immune system. Find the causes and how to protect yourself. 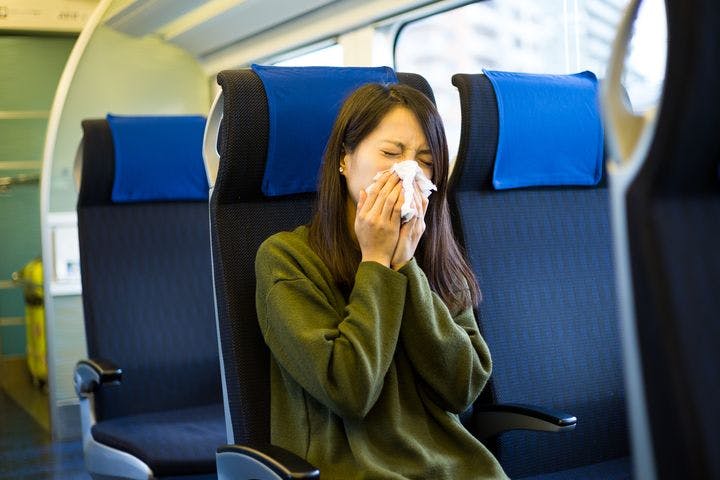 Now that travel restrictions are relaxed, you’re probably eager to leave your house to go on a holiday exodus and explore other countries. When sorting out your travel essentials, there’s one thing you absolutely need to leave at home: a weak immune system.

Do you easily catch a cold or get an upset stomach every time you visit an unfamiliar place or try new foods? If you answer yes, then you might have a weak immune system. Falling ill might have been considered a minor inconvenience several years ago but in the post-pandemic era, feeling sick while you’re out and about could turn into a major health hazard.

What Does it Mean to Have a Weak Immune System?

People who suffer from immune system disorders are called immunocompromised.

What Causes a Weak Immune System?

There are four types of immunity disorders based on causes:

A person is born with the condition.

When a person has a disease such as AIDS, cancer the flu, mono or measles, or consumes medicine that makes them immunocompromised such as chemotherapy medication. Bad lifestyle habits such as smoking, excessive alcohol consumption and not taking in enough nutrients can also lead to this condition.

When a person’s immune system overreacts to otherwise harmless elements. Examples of this condition include asthma, allergies and eczema.

Having an autoimmune disease

This is when you have an immune system that attacks normal tissues. Until today, scientists haven’t yet discovered the exact reason why some people suffer from this condition.

Three of the most common autoimmune diseases are:

Six Signs You Have a Weak Immune System

have an immune disorder if you experience these signs when travelling:

High stress levels can affect the endocrine system, leading to several conditions, including a lowered immunity. Travelling can contribute to this, especially if a lot of planning and long travel times are involved.

The damaging impact of stress on the immune system is also noted by Traditional Chinese Medicine (TCM). It believes that emotional stress and its related symptoms like irritability, difficulty falling asleep and fatigue, can result in Qi Stagnation, making you more prone to illnesses.

If you seem to catch a cold when you travel and recover slowly from it, that’s a sign that your immune system is weak. In TCM, those with this symptom are believed to have Deficient Qi.

Almost 70% of the immune system can be found in the digestive tract. So, if you have frequent diarrhoea, gas and constipation, and not because you’re trying new foods in a foreign country, that may be because you’re immunocompromised. According to TCM, people with hard stools, which is a symptom of constipation, may have Yang Deficiency.

When you are wounded, your body’s cells will help your skin regenerate. Therefore, someone with a weak immune system will take a longer time than usual to heal.

Since your immune system’s main function is to fight infections, falling ill frequently, especially when you are in a new environment, indicates an issue.

If you should have recovered from jet lag but still feel extremely tired, it could be due to your immune system. A 2019 study published by the found a correlation between fatigue and the immune system. It states that a contributing element to fatigue is the central nervous system, which is impacted in many autoimmune disorders. It is why fatigue is a symptom of autoimmune diseases like lupus, multiple sclerosis, chronic fatigue syndrome, type 1 diabetes and rheumatoid arthritis.

What to do if You Have a Weak Immune System

Here are some precautions you can before travelling if you are immunocompromised:

If you think you have a weak immune system, you should contact your doctor to know what conditions you may suffer from prior to travelling. That way, you’ll be able to travel safely and healthily.

This is an adaptation of an article, “Stay Healthy When You Travel”, which first appeared on the Eu Yan Sang website.

Hot Weather to Cold: 6 Ways to Prevent Illnesses from Ruining Your Travel

Ready to travel now that borders are opening again? Follow these travel health tips to navigate changes from hot weather to cooler temperatures and vice versa.

Chickenpox and Measles: How to Tell Them Apart

Contagious and causing a red rash, chickenpox and measles share similar symptoms that might confuse people. However, both diseases have differences.

Oxidative stress was prevalent during the COVID-19 epidemic. Taking steps to calm the tension build-up is crucial towards preventing physical symptoms.

5 Reasons Why People Go on an Enzyme Diet

An enzyme diet links to multiple health benefits. Learn how to improve your health by consuming these specific foods.

Find out the immune-boosting benefits of consuming superfoods that are suggested by many Traditional Chinese Medicine practitioners.