You’re Probably Overeating and Don’t Know It. Here Are 5 Signs

Worried that you might have an unhealthy eating habit? Watch out for these signs of overeating and learn how to change this behaviour. 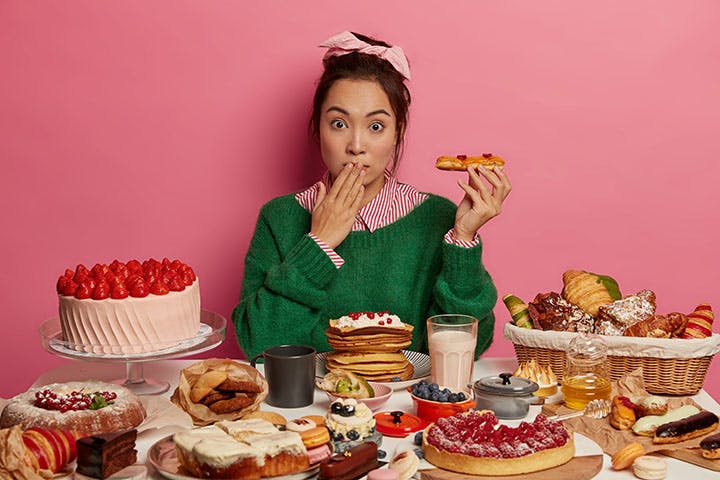 Malaysians are fiercely proud of our country’s cuisines, where eating during the festive seasons is considered a sport. It is important, however, to recognise the signs of overeating because this bad habit can have a negative impact on your health.

For one, 50% of Malaysians are either overweight or obese. About 4.4 million of us are also diabetic, among the highest numbers in the Asian region. The occasional holiday overeating is acceptable, but watch out for these signs that might indicate that you have a more serious overeating problem.

One of the tell-tale signs of overeating is being overweight. It goes without saying that if you regularly overeat, then you are consuming more calories than you expend. You enter a caloric surplus, turns into excessive body fat. Keep in mind that being overweight is not the same as being large. There are many athletes, for example, who are large-bodied, but are in great health.

Sluggish and Tired Most of the Time

The human body is a marvel. Scientists have posited that we evolved to have the ability to overeat in anticipation of famines. But in these times, with access to food all year round, some of us overeat frequently. This is taxing on our digestive system and our body as a whole. This is because it takes up a lot of energy, leaving us feeling tired and sluggish. If you are constantly sluggish, it could be a sign of overeating because your body is going into digestion overdrive.

Another sign of overeating is poor, disrupted sleep. While digesting food after a meal can make you feel sleepy, you are unlikely to get good sleep. Normally, when you sleep, digestion is one of the processes that slow down, while other restorative activities take over. This is why restful sleep is so important to overall health. When you overeat close to bedtime, you’re effectively forcing your body to engage in an activity that it typically does during the day. Instead of getting restful sleep, you instead will have a fitful sleep because your body is unable to properly recuperate.

Frequent Heartburn, Bloatedness, and Nausea because of overeating

One of the most common symptoms of overeating is heartburn. This is pain in the upper abdomen due to acid reflux. Eating too much food creates pressure and overproduction of acid in the stomach, making it more likely for you to develop a weak lower oesophageal sphincter muscle. This allows some of the stomach acid to flow back up the oesophagus, leading to heartburn. Along with heartburn, another sign is bloatedness, as well as nausea, due to high pressure in the stomach.

Over a long period of time, overeating can turn into an emotional crutch for you. There is a scientific explanation for this. Our endocrine (hormonal) system maintains a delicate balance to ensure our body does what it needs to do, at the right time. The hormone “Ghrelin” increases when we need to eat, sending signal to our brain that we’re hungry. Once we’ve eaten, the hormone leptin increases, telling us that we’re full. When we overeat a lot of rich foods, this signalling system between hormone Ghrelin and Leptin begins to break down. Our brain associates eating with the release of feel-good hormones, instead of sustenance. So if you notice that you reach for food because it makes you feel better, you might be chronically overeating.

Signs of Overeating and TCM

In Traditional Chinese Medicine (TCM), overeating is associated with impaired spleen function. The spleen organ system transforms nutrition from foods and liquids that we consume into qi (vital life energy), blood, and body fluids. When we overeat, we overburden the system. With excessive fluids, our body can develop excessive dampness which turns into phlegm, resulting in symptoms of phlegm-dampness. Digestive symptoms include feeling like your bowels can’t completely empty, feeling bloated, excess sweat and mucus, snoring, and strong body odour.

Overeating is also one of the behaviours that can lead to Type 2 diabetes, which is usually associated with a yin (passive energy) deficiency body constitution . In this case, this constitution usually presents a slender physique rather than obese. Incidentally, in TCM, diabetes is known as ‘xiao ke’, which means ‘wasting thirst”. It is believed that diabetes is mainly caused by yin deficiency and excessive heat in the body. TCM categorises ‘xiao ke’ into three types – the upper type characterised by excessive thirst, the middle by excessive hunger, the lower by excessive urination. All types are associated with yin deficiency and during the course of the illness, most people manifest symptoms of all three.

How to Stop Overeating

The best next course of action is to slowly re-establish your relationship with food by replacing bad habits with better ones.

Hence, watch out for signs of overeating beyond the occasional binge eating during the holiday season. We can link chronic overeating with many health issues that can worsen. The great news is that it can be managed. Overeating is a behaviour-related condition, and it is possible to kick this bad habit once and for all.

One of the lesser-known effects of obesity is vision loss. Find out how you can maintain a healthy weight and protect your eyes at the same time!

Debunking 5 IF Diet Myths: What You Need to Know About Intermittent Fasting

There's a lot of misinformation on intermittent fasting or IF diet floating around. Let's debunk some of the most prevalent myths about this diet.

5 Ways to Prevent Weight Gain During the Festive Season

Are you worried about gaining weight this festive season? Here are five ways to keep your weight in check and stay slim and healthy all the way.

7 Natural Remedies for Lack of Sleep

Lack of sleep can cause a variety of health conditions. Here are seven natural remedies that can fight the negative impacts of sleep deprivation.