6 Reasons Why Qigong is an Ideal Workout for Women

With its six health benefits, Qigong can be an ideal workout for women of all ages and backgrounds. 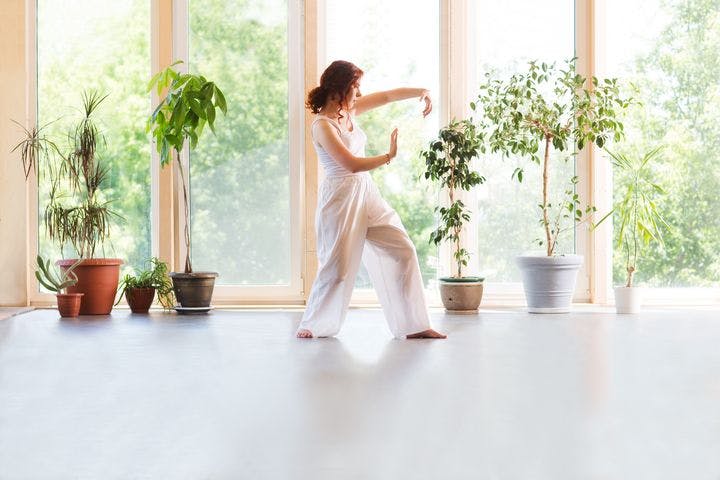 Whether you’re a female professional navigating in a male-dominated workplace, a working mom, a homemaker or a retiree, you’re bound to deal with hormonal changes and stress that drains your energy. While exercising is a typical recommendation to reduce physical and mental fatigue, it may be different for some women. Looking for that special workout can help you balance your home and career. It can also combat menstrual pain or hot flashes, which can be tough.

You can manage all these with Qigong, a gentle, relaxing workout that’s far from intense. Rooted in Traditional Chinese Medicine (TCM), Qigong might be the best option for women who are too busy or unmotivated to exercise. Read more as we talk about Qigong and its health benefits for women.

What is Qigong and Why it Could Be the Perfect Workout for Women?

Qigong is derived from “qi” and “gong”. In TCM, qi is the energy that flows inside the human body, while gong is the practice that cultivates qi. Based on the word origin, Qigong can be described as an exercise that cultivates qi or natural energy.

Qigong integrates meditation, breathing therapy, interlacing body movements and coordinated body posture. It focuses on the self-awareness of posture and stillness, which aims to reach the deep states of body-mind relaxation and calmness.

Qigong is closely related to Tai Chi because they share similar theories, components and aspects of TCM. Likewise, Qigong is often compared to yoga, as the principles behind the two exercises are similar.

However, Qigong features a simpler and more repetitive form. This characteristic is why Qigong is believed to be most suitable for women who are less likely to participate in vigorous activities.

Besides its lack of difficulty, Qigong is also known for its health properties, which can benefit women of all ages and backgrounds.

Benefits of Qigong Workout for Women

By cultivating qi, Qigong offers some health advantages for women, including:

Affecting women every month, PMS can be painful physically and mentally. Although gentle, TCM believes that Qigong’s manoeuvres work as a deep inner massage that enhances women’s pelvic health, preparing their bodies for each menstrual cycle.

A 2007 review published in The Journal of Pain presented evidence that Qigong can utilise its energy-healing power to intervene with pain in general. As for PMS, a 2015 article in the International Journal of Complementary & Alternative Medicine illustrated a trial where female college students successfully dealt with their negative feelings, pain and water retention following several Qigong sessions. Participants in another study also managed to reduce depression, anxiety and cramps. Since hormonal imbalances cause menstrual cramps, Qigong may be able to help regulate hormones.

Prepare a woman’s body for pregnancy

According to TCM, certain forms of Qigong can help prepare for pregnancy. The Jade Woman form, for example, can be applied in the first two trimesters. The Nourishing Woman can be performed throughout pregnancy and also after giving birth. Furthermore, TCM thinks that Qigong can promote breast milk production as well.

A 2010 study on pregnant women in Korea found that the mothers-to-be had a higher maternal or foetal interaction after practising Qigong exercises. They also had lower depressive symptoms and physical discomfort.

Battle the effects of menopause

A menopausal woman has to accept the fact that she’s entering the later stages of her life. Also, menopause symptoms can be unbearable too. They range from hot flashes, night sweats, headaches, insomnia, irritability, loss of sexual interest and decreased quality of life. From TCM’s perspective, Qigong can help women get through the symptoms by bringing their organs and hormone levels to a healthy equilibrium.

A study in Taiwan has proven that Qigong has impressive outcomes. After practising Qigong for 30 minutes every day for 12 weeks, a group of menopausal women succeeded in improving their symptoms.

Thanks to Qigong’s potential to regulate hormones, TCM believes that the exercise can fight exhaustion, migraine, depression, anxiety and insomnia.

Research revealed that Qigong could also decrease pro-inflammatory cytokines (small proteins that control the growth and activity of other cells), causing less stress. Qigong may help with mental health by activating the parasympathetic nervous system, the part of the nervous system that induces a state of rest and relaxation.

Meanwhile, multiple studies have shown that a form of Qigong called Ba Duan Jin is the most effective in reducing depression, anxiety, anger, tiredness and hostility. Ba Duan Jin can also increase energy, self-esteem and interpersonal sensitivity. A study conducted on women with breast cancer found that Ba Duan Jin can relieve depression and anxiety in patients.

It is thought that aligning the body with Qigong’s slow movements can support balance, coordination, strength, flexibility and posture.

There is evidence that Qigong can improve muscle endurance and strength. A 2021 study in Spain found that a 12-week Qigong program is beneficial for older women’s muscle strength and static posture.

From TCM’s point of view, Qigong can replenish Kidney jing (essence). In doing so, Qigong can strengthen immunity, nourish the bones, maintain sexual vitality, energize the body, sharpen the mind and heighten the spirit.

Research showed that women participating in Ba Duan Jin exhibited changes in chest size. Plus, they also lessened their waist, hipline and belly skinfold thickness. The result in weight control was even more evident when combined with the consumption of calcium pyruvate (a weight loss supplement). Alternatively, some people opt for whey protein as their complementary supplement.

Experts have also discovered that Qigong improves immunity and reduces inflammation. Ba Duan Jin can promote anti-ageing by increasing antioxidant enzymes and preventing bone loss. All in all, these qualities suggest that Qigong may possess an anti-ageing prowess.

Not only does Qigong have many health benefits, but it also doesn’t strain your body unlike other kinds of exercise. While Qigong might not be as popular as yoga or Tai Chi, more women should consider it an ideal workout.

This is an adaptation of an article, “Qigong: Every Woman’s Workout”, which first appeared on Eu Yan Sang website.

5 Body Posture Mistakes That You're Probably Guilty of Making

Bad body posture is what happens when your spine is put in awkward positions when sitting or standing. You may be putting pressure on your back and hips if you aren’t using the correct posture and it could have long-term effects on your body.

Classification of Cleft Lip and Palate: How to Prevent it

Does Your Child Have Bad Posture? Here’s How to Correct It

An article that lists the tips for achieving good posture in children.

Collagen peptides have numerous benefits for beauty, muscles and bones. However, not many people know it's also good for brain and gut health.

Gout Symptoms and Treatments: How to Deal with Intense Pain on Your Swollen Big Toe Joint

Uric acid deposits cause a form of arthritis called gout. Gout symptoms flare up when you consume specific foods or are of a certain age.

An article that lists the different methods to calculate your ideal body weight.