Reviewed by Dr Jessica Gunawan and Physician Vong U Chan

Suffering from acne vulgaris? These five facts will give you a clearer picture of this prevalent skin condition. 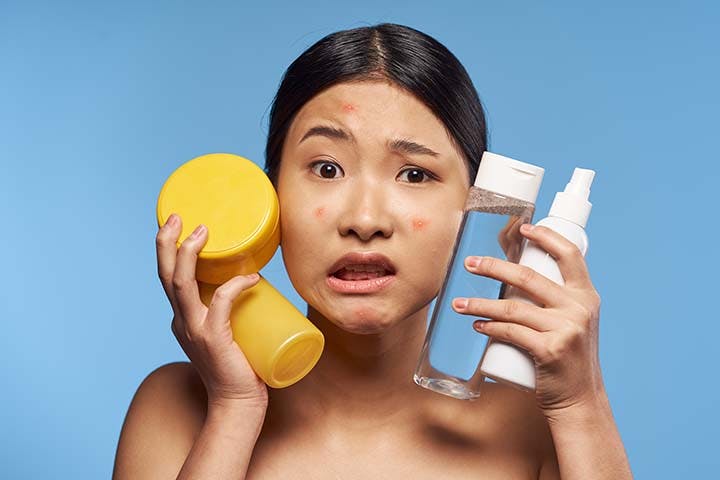 Acne vulgaris is a chronic inflammatory skin disorder that affects many. According to a Malaysian cross-sectional study, acne prevalence was the highest among those aged 20 to 24. What exactly is this skin condition, and how do you treat it? Here are five important facts about acne vulgaris and ways to combat it.

1. Sebum is not our enemy, but too much of it can be

Sebum is an oily and waxy substance secreted by our sebaceous glands, which help coat, protect, and moisturise our skin. However, too much sebum results in blockage of hair follicles, leading to inflammatory conditions.

As the blocked follicle ruptures, the site becomes more welcoming to Propionibacterium acnes (also known as Cutibacterium acnes), a microorganism that readily lives on our skin. Other pathogens can also join in, further exacerbating the inflammation.

Depending on the nature of the blockage and severity of inflammation, the blocked hair follicles may manifest as blackheads or whiteheads, red bumps filled with pus, and in more severe cases, as large painful cystic pustules.

While we associate acne with the onset of puberty, this skin condition affects teenagers and adults alike. For example, some menopausal women may also experience acne due to hormonal fluctuations.

Our bodies produce a sudden surge of hormones during puberty that increases sebum production. While we expect our endocrine system to eventually mature and stabilise into adulthood, this isn’t always the case.

Hormonal imbalances, as well as other factors such as lifestyle and diet, come into play as we become adults, resulting in acne that persists well into our later years. In addition, women who have acne around the jawline may point to hormonal issues such as polycystic ovary syndrome or PCOS. However, the location of acne on the face doesn’t necessarily correspond to different organs of the body.

3. Both internal and external factors can lead to acne

Different factors lead to the overproduction of sebum, which results in blocked hair follicles. These factors can either be internal, such as hormonal fluctuations or systemic reactions to certain medications, or external, such as wearing makeup or clothing that traps sweat and bacteria.

There’s also a difference between “acne” and “cosmetic acne”. Cosmetic acne caused by the application of unsuitable cosmetics will suddenly appear as blackheads or whiteheads within days of wearing makeup. Meanwhile, “acne” (as opposed to “cosmetic acne”) refers to acne that comes and goes with hormonal changes or fluctuations.

Like Western medicine, Traditional Chinese Medicine (TCM) also considers inflammatory conditions when treating acne vulgaris. However, it moves beyond looking at the localised overproduction of sebum.

TCM associates the symptoms of acne vulgaris with excess yang (active energy) or deficient yin (passive energy). A TCM practitioner would perform syndrome differentiation by observing the nature of the acne and the accompanying symptoms.

Different syndromes include wind-heat in the lungs, damp-heat in the spleen and stomach, phlegm and blood stasis, or even disharmony in the chong or reproductive channels (which is parallel to Western medicine’s observation of how hormones contribute to acne).

Acne treatment should be comprehensive and includes both topical and systemic regimens.

For instance, mild acne that includes swelling can be treated with antibiotic creams such as benzoyl peroxide, clindamycin or retinoids.

On the other hand, patients suffering from moderate to severe acne with aggregated lumps, pimples, and cysts can benefit from taking oral antibiotics such as doxycycline or erythromycin. Do consult a dermatologist before you opt for any over-the-counter medications.

Natural skin remedies or TCM formulas can also work in conjunction with pharmaceuticals. For example, pearl powder, known for its anti-inflammatory benefits, helps with clearing heat in the body. Studies show that this nature-based remedy, which can be used topically and orally, to calm the mind, promote soothing effects on the liver, and help regulate the endocrine (hormonal) system. \

5. Acne can leave scars even if you don’t squeeze them

You have probably been told not to pop your pimple as you would risk further aggravating it and causing deep scarring. Unfortunately, inflamed and cystic acne will also leave scars even if you leave it alone.

While acne vulgaris is not detrimental to physiological health, it can seriously affect the social psychology of patients. Many people with acne report feeling embarrassed and inferior, especially when scars remain long after the pimples have subsided.

The good news is, both physical and psychological scars due to acne vulgaris can be addressed. Although not an easy feat, acne scars can be treated with different types of intervention, including scar-lightening creams, laser treatment, and filling.

The key to managing and treating acne vulgaris is to utilise both topical and systemic approaches, as well as make lifestyle choices that decrease the chances of recurrence. Fortunately, many treatments are available in Malaysia to ensure healthy and acne-free skin, better self-confidence, and a more positive self-image.

This is an adaptation of an article, “何谓寻常性痤疮？(What is acne vulgaris?)”, which first appeared on Health123 website.

How to Keep Your Cholesterol Level Low from the Inside Out

Having a high cholesterol level can happen even among young adults. You should find out the causes and your options for keeping it at the right level.

Like anything else in life, some fats are bad, and others are good. Find out what good fats are and how eating them can help you lose weight.

Psoriasis is an immune system disorder. If left untreated, the disease can put a person at risk of conditions like psoriatic arthritis.