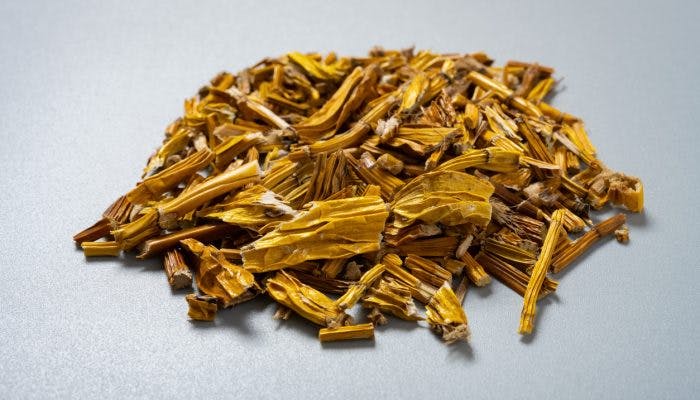 Dendrobium (shi hu, 石斛), also known as Dendrobium Nobile, Dendrobium Orchid, and the Noble Dendrobium, is a orchid that has a long, thin, and golden-yellow stem. While different varieties of Dendrobium come in different colours, the most common ones are yellow and pink. The stem is the main medicinal part used in herbal remedies.

Recorded in ‘Shen Nong’s Herbal Classic’ (神农本草经), this herb has been used medicinally for at least 2000 years. As a native of the Himalayas and its surrounding area, this herb usually grows atop perpendicular cliff walls and high elevations within the deciduous forests. After the herb is harvested, it is cut and dried under the Sun for medicinal usage.

In Traditional Chinese Medicine (TCM), Dendrobium falls under the category of ‘Tonic herbs for Yin Deficiency’. It can replenish one’s ‘Four Treasures’ (qi, blood, yin, yang). Cool in nature, Dendrobium helps individuals who have too much Heat in their body, such as those experiencing a Yang Excess or a Yin Deficiency, to restore a healthy yin-yang balance.

Sweet in taste, Dendrobium can slow down acute reactions, detoxify the body, and has a tonic effect on the body. In particular, Dendrobium targets the Kidneys, the Lungs and the stomach.

Functions and Benefits of Dendrobium

Dendrobium can tonify yin in the Lungs, Kidneys and stomach. Some Chinese Taoists used to consume it via tea on a daily basis as it was believed that the herb can promote longevity and build jing (essence). Peking Opera masters have also used Dendrobium tea to protect their throats and voice too. In addition, restoring Kidney jing can boost immunity, improve the generation of body fluids such as saliva and gastric juice to promote digestion, and it can boost sexual performance as well.

The secretion of fluids may also lubricate joints, which help to strengthen tendons, bones, relieve joint pain and reduce rheumatism.

Dendrobium can also clear Heat, moisten and nourish skin to prevent dryness, strengthen the lower back, improve vision and tackle eye problems. For example, the herb can help to relieve dry eyes. In fact, natives of the Himalayas used Dendrobium to treat red eye disorders.

Modern studies have shown that Dendrobium is also effective in relieving abdominal pain and epigastric pain. The herb also has a good choleretic effect that can protect the Liver and gallbladder. It is also suggested that Dendrobium can reduce stress levels, decrease fatigue, dilate blood vessels, lower blood cholesterol and blood sugar levels.

Some studies also suggested that Dendrobium can eliminate certain cells of malignancies to inhibit tumours associated with diseases such as lung cancer, ovarian cancer and promyelocytic leukemia. In other words, it can improve symptoms of cancer patients, reduce side effects of chemotherapy and radiotherapy, and prolong survival time.

Modern pharmacological studies have also confirmed that the herb can make a difference on the prevention and treatment of senile cataract and children’s eyesight.

How to Use Dendrobium

The recommended dosage of Dendrobium is between 6 – 12g for dried form, and 12 – 30g in fresh form, when boiled in water to brew tea. Larger doses up to 20g may be used, depending on the condition being treated.

Dendrobium comes in various forms, such as powders, extracts, pills, paste and tea. They are available at most Asian markets, specialty health food stores and herbal stores.

Cautions and Side Effects of Dendrobium

Dendrobium should not be used by individuals who are experiencing febrile diseases in the beginning stage. Also, there are concerns that Dendrobium might increase the risk of seizure in certain individuals. We also do not encourage pregnant or breastfeeding ladies to consume Dendrobium.

While the American Herbal Products Association has given Dendrobium a class one rating, meaning that it is safe when consumed at appropriate doses, one should not consume Dendrobium in large doses. That is because large doses can have an adverse effect on the Heart and Lungs, and overdoses can cause convulsions.

As always, we strongly encourage you to consult your healthcare provider before deciding to add Dendrobium to your diet!

Here is a summary for Dendrobium: