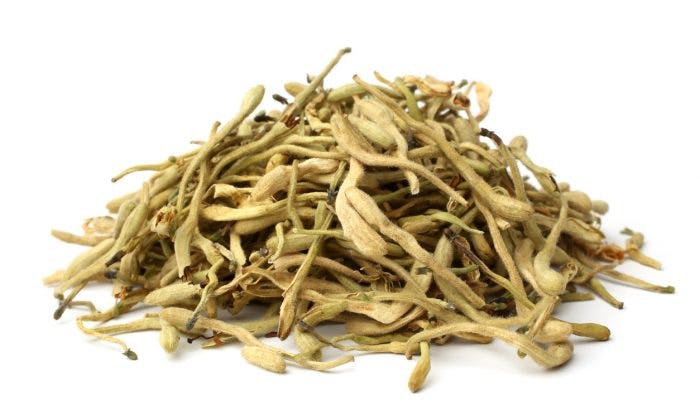 What is Japanese Honeysuckle Flower?

Japanese Honeysuckle Flower (jin yin hua 金银花) is a traditional medicinal herb that has been widely used to dispel inner Heat. This plant grows in subtropical areas, and while it likes sunny climates, it can also endure cold and dark environments. It can survive in both humid and dry places, as well as both acidic and alkaline soil. A summer favourite, the herb is often made into various drinks and other healthcare products that are easily available in drug stores and convenience stores.

A snow white bud and a golden yellow blossom, Japanese Honeysuckle Flower’s appearance is exactly what gave it its name. Listed in the Compendium of Materia Medica (Ben Cao Gang Mu, 本草纲目), it is recorded as an effective remedy that has a pleasant aroma to remove inner Heat without hurting the stomach. In fact, its penetrating fragrance can help to eliminate pathogens. Japanese Honeysuckle Flower has also been proven effective in cleaning the bud, treating fever, reducing skin eruptions and relieving sore throats.

It was said that a long time ago, a married couple gave birth to two lovely girls who are twins. Since their daughters were as precious to them as silver and gold, and as beautiful to them as flowers, they were named jin hua, 金花 (golden flower) and yin hua, 银花 (silver flower). As they grew up, they shared a strong soul connection with each other, and their beauty bloomed further. One day, jin hua fell severely ill. She caught a high fever and developed a rash over her entire body. She was so weak that she could not leave her bed. Their parents were extremely worried, and they called the doctor to visit. The doctor diagnosed that jin hua’s illness was caused by a Warm disease, and that he had no way to cure it. Yin Hua stayed by her older sister’s bed and cried till her eyes were sore.

Shortly after, yin hua also got infected by the disease and became bed-ridden. As their parents wailed by their bed, the two sisters proclaimed that when they are dead, they want to turn into a herb that cures Warm disease in order to prevent anyone from dying due to such illnesses in the future. After they died, they were buried together, and a vine sprouted from their grave after a year. It grew and blossomed silver and golden-yellow flowers. When the villagers saw, they recalled the sisters’ proclamation, and picked the flowers to decoct them and let the villagers who were diagnosed with Warm disease drink it. Those patients soon made a quick recovery. The flowers are none other than the Japanese Honeysuckle Flower.

In Traditional Chinese Medicine (TCM), Japanese Honeysuckle Flower falls under the category of ‘Herbs that clear Heat and relieve Toxicity’. Such herbs can clear inflammatory and infectious conditions, which are caused by Internal Heat. Hence, most herbs in this category have both antibacterial and antiviral properties. Cold in nature, Japanese Honeysuckle Flower can thus be used to restore the yin-yang balance in individuals who have Yin Deficiency or Yang Excess. The sweet taste of the flower also suggests that it can slow down acute reactions, detoxify the body, and has a tonic effect by replenishing qi and blood. In particular, Japanese Honeysuckle Flower is thought to target the Heart, the Lungs and the stomach.

Firstly, Japanese Honeysuckle Flower can clear Heat and dispel toxicity. It is used to treat ailments such as fever, rashes, ulcers, inflammation, hot boils, sores or swellings, especially in the breast, eyes and throat. For example, it can be used to treat swollen lymph nodes.

Secondly, Japanese Honeysuckle Flower can dispel Wind-Heat derived from external pathogens out of one’s Lungs and defense system. It is thus effective in treating common colds that come with fever, sore throat, headaches and summer-heat symptoms. This herb is also a singer’s favourite as it can help to take care of their vocal cords.

Thirdly, Japanese Honeysuckle Flower can expel Damp-Heat from the Lower Burner. This helps to tackle symptoms such as diarrhoea, dysentery, intestinal abscesses and painful urination.

Modern research also found that there are numerous Japanese Honeysuckle benefits for skin and for natural healing, such as reducing inflammation and acne, managing blood sugar levels, and treating nausea symptoms, among others.

For example, the herb can help to reduce the risk of chronic diseases by soothing inflammation in our body. It can clear up skin inflammation conditions such as eczema, psoriasis, acne and rosacea. It can eliminate inflammation in our respiratory tracts associated with bronchitis and sore throat. It can also help to improve our body’s immune response to reduce infection and vulnerability to disease. Not only that, it can also manage our blood sugar levels to lower our risk of developing diabetes.

In aromatherapy, it is also found that Japanese Honeysuckle Flower can aid in relaxation and the relief of sinus pressure.

How to Use Japanese Honeysuckle Flower

There are countless ways for us to use the Japanese Honeysuckle Flower to improve our health as it can either be consumed or be applied to skin.

The plant is commonly made into tinctures, infusions and teas. In particular, many use Japanese Honeysuckle Flower Tea as a quick remedy for cold and flu symptoms.

The herb can also be used externally. For example, one can add Japanese Honeysuckle flowers to one’s bath, apply its cream on one’s skin, or even its liquid as an acne face mask to reduce skin redness and swelling.

The typical dose of Japanese Honeysuckle Flower is between 6 – 15g when used for oral administration. Larger doses may be used when the herb is applied to the skin.

Cautions and Side Effects of Japanese Honeysuckle Flower

Individuals who are experiencing Spleen Deficiency or Stomach Deficiency while having a cold or diarrhoea. Also, it should be used with caution when one has Qi or Yin Deficiency.

Do note that skin contact with Japanese Honeysuckle Flower might cause rashes for people with existing allergies. Also, it may cause gastrointestinal side effects.

We recommend that pregnant and breast-feeding ladies should refrain from using the herb as there are many active compounds in it.

It was also discovered that this herb may slow blood clotting, so there are concerns that it may increase the risk of extra bleeding during and post-surgery. Hence, do avoid using this herb 2 weeks before a scheduled surgery.

Here is a summary for Japanese Honeysuckle Flower: