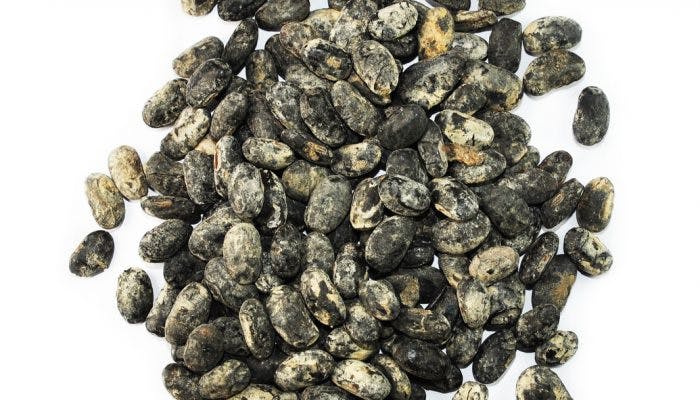 What is Fermented Soybean?

Fermented Soybean (dan dou chi, 淡豆豉), also known as Semen Sojae Preparatum and Fermented Glycine Max, has been used as a source of protein for centuries. The cultivation of soybeans dates back more than 3000 years, and the use of soybeans as a replacement for meat is first recorded in the sixth century CE. In herbal medicine, soybeans undergo a fermentation process, which includes press-steaming, fermenting, and then drying the bean in the Sun, to form Fermented Soybean.

In Traditional Chinese Medicine (TCM), Fermented Soybean falls under the category of ‘Cool/Acrid herbs that release the Exterior’. This category of herbs aim to treat the early stages of diseases that affect the upper respiratory tract, the eyes, the ears, the nose, the throat or the skin.

Cold in nature, Fermented Soybean can help individuals who have too much Heat in their body, such as those experiencing a Yang Excess or a Yin Deficiency, to restore a healthy yin-yang balance. Bitter and pungent, Fermented Soybean can cleanse the body by clearing Heat, dying Dampness, and promoting elimination via urination or bowel movements. The herb can also promote the circulation of qi and body fluids. In particular, Fermented Soybean targets the Lungs and the stomach.

Functions and Benefits of Fermented Soybean

Fermented Soybeans can disperse external pathogens to alleviate external diseases such as colds or allergies. TCM believes that external diseases can only invade the body if the external environment overwhelms our wei qi (卫气, immune system), and to counteract this invasion, Cool/Acrid herbs like Fermented Soybeans aim to induce sweating by dilating our capillary pores so that they release more sweat. The belief is that this will expel the disease from the body and stop it from invading further.

Also, Fermented Soybeans are often used to treat conditions such as restlessness, irritability and to improve sleep patterns. The herb can reduce fever, headache, aid digestion, and relieve stuffiness and congestion in the chest.

As Fermented Soybeans can send down the adverse flow of qi and detoxify the body, the herb is used for abdominal distention, vomiting, diarrhoea, abdominal pain, warm diseases and carbuncles.

Modern studies have also suggested that Fermented Soybeans may be able to help prevent certain cancers. For example, the herb may be able to reduce the risk of prostate, stomach and breast cancer. The herb may also help to counteract the effects of chemotherapy and other forms of radiation.

By strengthening the Spleen, Fermented Soybean can enhance digestion, improve your gut and eventually, skin health. Hence, this herb may be able to help you attain clear skin by preventing skin ageing, stimulate collagen and elastin synthesis, and improve skin healing.

How to Use Fermented Soybean

The recommended dosage of Fermented Soybean is 10 – 15g, boiled in water to make a decoction or tea.

Cautions and Side Effects of Fermented Soybean

As Fermented Soybean is believed to inhibit lactation, it should not be taken by women who are pregnant or breastfeeding. Individuals allergic to soy or have weakness of Spleen and stomach should avoid Fermented Soybeans too. Excessive intake of Fermented Soybeans may also cause mild side effects such as stomach pain, loose stools, fatigue or diarrhoea.

As always, we strongly encourage you to consult your healthcare provider before deciding to add Fermented Soybean to your diet. In particular, children and the elderly should take Fermented Soybean under the guidance of a doctor.

Here is a summary for Fermented Soybean: