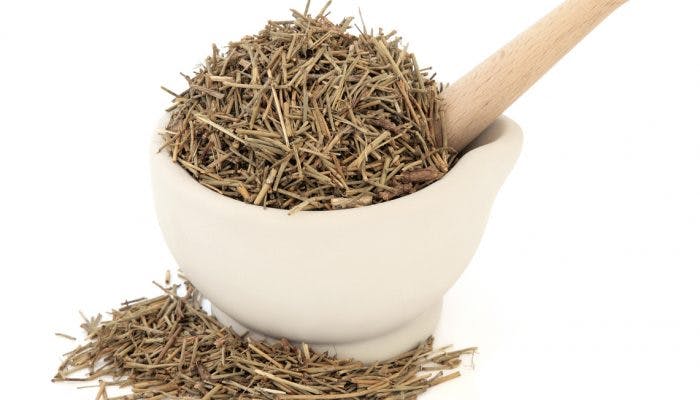 Ephedra (ma huang,  麻黄) is a small, twiggy shrub that is native to Asia. Traditionally, the branches of the herb are used medicinally to treat many diseases. In China, the Ephedra plant (Ephedra Altissima) has been in use for more than 2000 years. While the Ephedra plant contains multiple chemical compounds, most of the effects of Ephedra comes from the molecule Ephedrine. This molecule is said to increase metabolic rate and burn fats.

In the early 1990s, Ephedra came into popularity in the United States due to its ability to promote weight loss and enhance athletic performance. It became a common ingredient in dietary supplements until the mid-2000s, where safety concerns about its possible “drug-like” effects caused it to be banned in many countries. The herb is now banned by many professional sports due to its hallucinogenic and narcotic effects on the consumers.

Today, Ephedra is one of the 13 herbal ingredients used to make Lianhua Qingwen, the pills that are prominently used to treat COVID-19 and respiratory diseases in China.

In Traditional Chinese Medicine (TCM), Ephedra falls under the category of ‘Warm/Acrid herbs that release the Exterior’. Warm in nature, Ephedra can help individuals who have too much Cold in their body, such as those experiencing a Yin Excess or a Yang Deficiency, to restore a healthy yin-yang balance.

Bitter and pungent, Ephedra has a cleansing action on the body by clearing Heat, drying Dampness and promoting elimination via urination or bowel movements. Also, it can promote the circulation of qi and body fluids. In particular, Ephedra targets the bladder and the Lungs.

Functions and Benefits of Ephedra

Ephedra can induce sweating by increasing the flow of sweat to our capillary pores, which help to expel External Wind-Cold pathogens from the body and prevent them from invading the body any further. Examples of such diseases are the early stages of diseases that affect the upper respiratory tract, the eyes, the ears, the nose, the throat or the skin. As Ephedra can promote the circulation of Lung qi, this herb is effective in treating Wind-Cold Excess syndrome with dyspnea and coughing.

Other than dispersing Wind-Cold, Ephedra is also indicated for rashes, pruritus, nasal obstruction and runny nose due to Wind-Cold. Because of its ability to dispel Cold and release Stagnation, it can also be used for Wind-Cold arthralgia with pain and other interior Cold syndromes.

Ephedra can also promote urination to reduce oedema, which makes it a great herb for syndromes that involve difficult urination.

Other than the above Ephedra benefits, modern studies have also suggested that Ephedra can improve heart health, boost energy levels and eliminate fatigue. The active compound of the herb, Ephedrine, can stimulate the heart and increase blood flow, which energizes the body with blood and oxygen. However, this may also put a strain on the heart if the individual is suffering from certain heart conditions. Also, while this herb can help individuals who suffer from chronic fatigue, this herb should only be used in small amounts.

Adding Ephedra to your diet may also help individuals who are experiencing hypotension to boost their blood pressure levels.

Ephedra is also suggested to stimulate one’s metabolism, which increases the rate of fat-burning to help one lose weight over a short period of time. However, many safety concerns about this effect have arise over the past few years.

There have also been certain studies that draw a connection between Ephedra and improved cognition. This may be due to the increased blood flow to the brain and other vital organs.

Last but not least, Ephedra can help to reduce inflammation of mucous membranes in the body, especially in the respiratory tract, which makes it effective in preventing asthmatic attacks and wheezing.

How to Use Ephedra

Until April 2004, Ephedra was available in a variety of forms, including pills, capsules and tablets. Other common forms include Ephedra extract and Ephedra tea. It was also sold as a component of several herbal formulas and many weight-loss formulas.

However, ever since concerns about the safety of this herb have arise, an increasing number of Ephedra supplements are taken off the shelves.

Ephedra should also only be used on a short-term basis because prolonged use may lead to addiction. The amount of time considered safe, however, is not clear. In addition, the appropriate dosage of Ephedra is very dependent on the exact condition being treated. Hence, we strongly advise you that consumption of Ephedra should only take place under the guidance and supervision of your healthcare provider.

Cautions and Side Effects of Ephedra

Also, Ephedra should not be used for extended periods of time or in large doses. This is due to the fact that Ephedra can stimulate the central nervous system and increase blood pressure. It is also not recommended for competing athletes due to the active compound, ephedrine.

Women who are pregnant or breastfeeding should avoid consuming this herb for the time being as well. In addition, it is contraindicated for a wide range of conditions, including anorexia, bulimia and glaucoma.

The herb also contains active substances that can trigger side effects and interact with other herbs, supplements, or medications. Some side effects include irritability, restlessness, anxiety, insomnia, headaches, nausea, vomiting, and urinary problems. More serious side effects include high blood pressure, rapid or irregular heartbeat, stroke, seizures, addiction, and even death. If you experience any of these adverse effects, discontinue using Ephedra and contact your healthcare provider immediately.

Here is a summary for Ephedra: