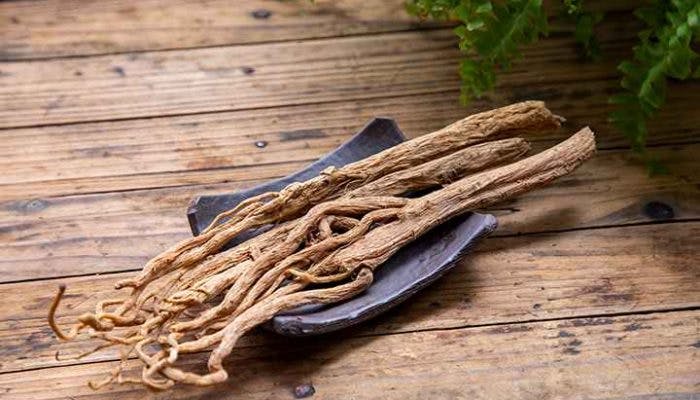 Tangshen (Dang Shen, 党参), also known as Codonopsis, is the dried root of Salvia miltiorrhiza, a fast-growing vine that blooms during the summer and fall. The plant is a perennial herb that can reach a height of ten feet, with oval or heart-shaped leaves and ornate, bell-shaped flowers. The colour of its flowers can range from yellow to light purple, and its roots are usually harvested during its third or fourth year of growth.

Codonopsis is often used as a cheaper and more gentle alternative to the stronger Ginseng, hence the nickname ‘Poor Man’s Ginseng’.

In Traditional Chinese Medicine (TCM), Codonopsis falls under the category of ‘Tonic herbs for Qi Deficiency’, and is used for patterns of deficiency to replenish one’s ‘Four Treasures’ (qi, blood, yin, yang). Neutral in nature and sweet in taste, this herb tends to slow down acute reactions and detoxify the body. It also has a tonic effect on the human body. In particular, Codonopsis targets the Lungs and Spleen.

Functions and Benefits of Tangshen (Codonopsis)

Firstly, Codonopsis can tonify the qi in our Spleen and Lungs. It is often used for symptoms induced by the lack of middle-warmer energy, such as fatigue caused by weakness, loss of appetite and diarrhea. It can also be combined with other herbs such as Astragalus Root to relieve symptoms such as cough, low voice and shortness of breath. Just like Ginseng, Codonopsis provides similar benefits to our Spleen and Lungs. However, its efficacy is slightly weaker than that of Ginseng. As a result, many people use Codonopsis root to replace Ginseng in ancient prescriptions for the treatment of mild cases of Spleen-Lung Qi Deficiency.

Secondly, Codonopsis can enrich our blood. This makes it an excellent medicine for the failure of hematogenesis due to Qi Deficiency or abnormality of one’s body fluid metabolism due to Blood Deficiency. Examples of symptoms caused by the mentioned syndromes include pale or sallow complexion, fatigue, dizziness and palpitations.

Thirdly, Codonopsis can assist with the secretion of bodily fluids by promoting the production of it. It is frequently used for the injury of qi and body fluid caused by excessive Heat, which is often manifested as shortness of breath and thirst.

Other than the above benefits of Codonopsis, modern research has also discovered that Codonopsis can provide us with the following benefits. Other than regulating gastrointestinal motility, this herb can also help us fight against ulcer and enhance immunity. As its pharmacological effects include helping to increase red and white blood cell count, anemia, stimulate the nervous system and improve blood sugar levels, it can help to alleviate disorders including high blood pressure, diabetes, loss of memory and insomnia.

Also, it is extremely effective at boosting vitality and relieving fatigue. Many women use it to replenish their blood, especially after menstruation or post-birth. Thus, Codonopsis is an excellent herb for post-partum and post-natal care as well as heavy menstruation flow.

Some researchers have also theorized that Codonopsis may benefit patients who are undergoing AIDS treatment or chemotherapy, as it can reduce the side effects of toxic drugs by increasing red and white blood cells.

Codonopsis is an excellent herb for both elderly and children as well. It can help to build strong muscles in children as they grow, and help to support the immune system of older people with the polysaccharides it contains.

How to Use Tangshen (Codonopsis)

Many people like to add Codonopsis to their diet through herbal recipes or by simply adding it to their meals.

For example, some popular herbal dishes that include Codonopsis are Tangshen Black Chicken soup and Tangshen Tea with Red Dates and Longan. Some also like to add Codonopsis to their breakfast congees or oatmeal for its health benefits.

Cautions and Side Effects of Tangshen (Codonopsis)

Some common side effects caused by the consumption of Codonopsis include itching, upset stomach and reduced appetite.

There is also some concern that Codonopsis may cause drowsiness, dizziness, and a blood condition called thrombocytopenia.

Also, there is not enough reliable information about the safety of taking Codonopsis if you are pregnant or breastfeeding. There is also concern that Codonopsis might increase the risk of bleeding, Hence, if you have a bleeding disorder, it’s best to avoid using it.

Not only that, Codonopsis may also slow down blood clotting. Hence, there is a concern that it might increase the risk of extra bleeding during and post-surgery. It is suggested that individuals should stop using Codonopsis at least 2 weeks before a scheduled surgery.

Here is a summary for Codonopsis: