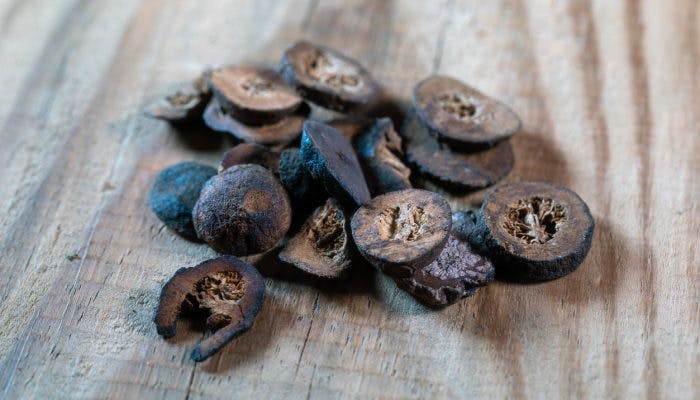 What is Bitter Orange (Citrus Aurantium)?

Bitter Orange (zhi shi, 枳实), also known as Immature Orange Fruit, Citrus Aurantium, Seville Orange or Sour Orange, is a sour citrus fruit that is a common main ingredient in Orange Marmalade. Native to East Africa, the Arabian Peninsula, Syria, and Southeast Asia, Bitter Orange is one of the most tart and pungent citrus fruits in the world.

During the Middle Ages, Bitter Orange became a favourite in the Middle East and was highly respected by Arabian physicians. During the 16th Century, it was said that an Italian princess named Anna-Marie de Nerola extracted oil from the flowers of this plant to scent her gloves. Till today, this floral oil is still used in perfumes and essential oils.

An invaluable therapeutic herb, Bitter Orange is also applauded for its medicinal usages, which are commonly used in Traditional Chinese Medicine (TCM).

In TCM, Bitter Orange falls under the category of ‘Herbs that regulate qi’. Such herbs typically treated Qi Stagnation. Cool in nature, this herb can help individuals with too much Heat in their body, such as those experiencing a Yang Excess or a Yin Deficiency, to restore a healthy yin-yang balance.

Bitter in taste, Bitter Orange can cleanse the body by clearing Heat, drying Dampness and promoting elimination via urination or bowel movements. Also, the herb can promote the circulation of qi and body fluids. In particular, the herb can target the Spleen, the stomach and the large intestine.

Bitter Orange can regulate the flow of qi in the middle burner to reduce food stagnation and accumulation. This herb can help to treat epigastric or abdominal pain, indigestion, acid reflux, belching and foul breath. Also, this herb can move qi downwards to relieve constipation, abdominal hardness, dysentery and tenesmus.

Bitter Orange can also reduce Phlegm to relieve distention and lessen pain. For example, the herb can treat painful obstructions in the chest, coronary heart disorders, poor appetite, shortness of breath, gas, fatigue and weakness due to phlegm accumulation and Heart Yang Deficiency. Bitter Orange can also be used to address prolapse of organs when used with the appropriate herbs.

Today, Bitter Orange is also commonly found in weight loss pills and capsules. Some suggest that it may aid weight management. The herb is also used to increase blood pressure levels for individuals experiencing low blood pressure and provide support in the management of diabetes.

Bitter Orange can also be applied externally to treat fungal infections such as Athlete’s Foot and ringworm. One study demonstrated that, when applied topically, Bitter Orange can reduce fungal growth by 96.43%. A definite bonus is that there are very few noted negative side effects when applying Bitter Orange externally, which makes it a low-risk treatment option. The herb can also promote skin health.

How to Use Bitter Orange (Citrus Aurantium)

The recommended dosage of Bitter Orange is 3 – 10g.

As Bitter Orange is incredibly sour, few individuals choose to consume it raw. Many prepare it into Bitter Orange Marmalade that can be enjoyed over toast, crackers, cheese, pork chops or chicken. In Mexico, a common way to prepare it is to cut the orange in half, salt it, and then coat it with hot chili paste before eating it. In Spain, Bitter orange juice is used to flavour fish and meat. On the other hand, in Yucatan, Bitter Orange is used like vinegar. Egyptians even ferment Bitter Orange to make wine. Bitter orange oil is also used all over the world to flavor liqueur, chewing gum, ice cream, gelatin, and candy.

Do note that the medicinal actions of the herb will become mild if it is stir-baked.

Cautions and Side Effects of Bitter Orange (Citrus Aurantium)

Bitter Orange should be used with caution by individuals experiencing pregnancy, Qi Deficiency or Cold in the Stomach.

Also, Bitter Orange contains Synephrine, which raises blood pressure levels. Thus, individuals with high blood pressure should avoid consuming Bitter Orange too. As Synephrine is a stimulant, some common side effects associated with it include jitters, headache, increased heart rate and higher sensitivity to the sun. There are also reports of Bitter Orange resulting in migraine, fainting, heart attack and stroke.

Here is a summary for Bitter Orange (Citrus Aurantium):