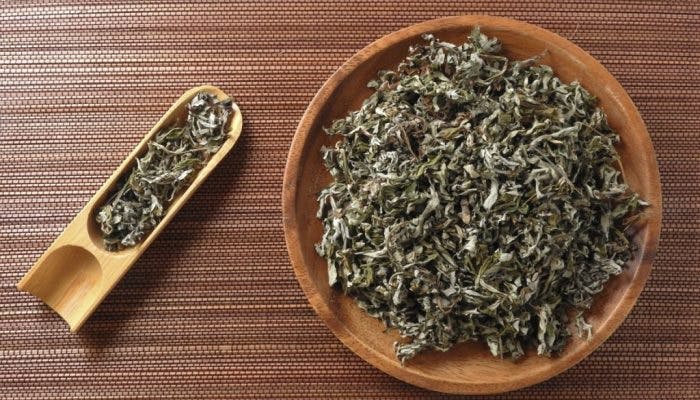 What is Chinese Mugwort (Ai Ye)?

Chinese Mugwort (艾叶, ai ye), also known as Argy Wormwood Leaf, comes from a common weed in China. The plant is often found along hillsides, grassy areas and the margins of forests. It resembles a shrub, reaching a height of more than three feet, with small greenish yellow flowers and grayish green leaves. These leaves are gathered in the spring and summer, and dried in a shady place before being used medicinally.

In Guangdong, the tender young Argy Wormwood Leaves are eaten as a vegetable during Winter and Spring. Also, in South China, Ai Ye is mixed with glutinous rice flour and fillings such as peanut, sesame and white sugar to make glutinous rice cakes. During Dragon Boat Festival, people also hang Ai Ye on the door of their houses, as they believe that it can fend off evil from their homes for the year.

In Traditional Chinese Medicine (TCM), Chinese Mugwort falls under the category of ‘Herbs that invigorate the blood’. Such herbs can promote the circulation of blood, especially for individuals with cardiovascular conditions, Blood Stagnation or menstrual irregularities.

Warm in nature, the herb can help individuals who have too much Cold in their body, such as those experiencing a Yin Excess or a Yang Deficiency, to restore a healthy yin-yang balance. Bitter and pungent in taste, Chinese Mugwort can cleanse the body by clearing Heat, drying Dampness and promoting elimination via urination and bowel movements. Also, the herb can promote the circulation of qi and body fluids.

Chinese Mugwort can warm your meridians and stop bleeding. By dispelling Cold, warming qi and blood, the herb is indicated for bleeding symptoms, such as nosebleed, metrorrhagia and metrostaxis.

Also, by dispelling Cold and Dampness, the herb can alleviate pain caused by Cold, such as foot pain, period cramps, abdominal pain, and regulate menstruation. Chinese Mugwort is thus often used to treat gynecological diseases and infertility caused by Cold. By eliminating Dampness, the herb can also be decocted or applied externally as a wash for skin problems such as itching.

Chinese Mugwort can also calm a restless fetus and warm the uterus to help prevent miscarriage. In Zhou Hou Fang (A Hand Book of Prescriptions for Emergencies), the herb is decocted in wine to treat the risk of miscarriage caused by Cold in the Liver or Kidneys. In addition, Chinese Mugwort can resolve phlegm and relieve asthma and cough. When used as an extracted oil, it can relieve wheezing and coughing with profuse sputum.

Other than the above benefits, Chinese Mugwort can be used via moxibustion for tonification and to treat Qi Stagnation. Made into a moxa stick, moxa cone or used on top of an acupuncture needle, Chinese Mugwort can fumigate body acupoints to warm qi and blood, penetrate meridians, and treat various pain symptoms caused by Yang Deficiency, external Cold or Damp pathogens, or exuberant Cold.

Chinese Mugwort may also be beneficial for treating inflammatory conditions, such as inflammation associated with Crohn’s disease. The herb is also suggested to be effective for treating immune disorders, tuberculosis, intracellular viruses and bacterial infections.

Another review indicated that Chinese Mugwort may possess antidepressant effects and the ability to increase serotonin levels. It may benefit individuals who are suffering from neurological diseases, such as Alzheimer’s or Parkinson’s.

Other research has suggested that Chinese Mugwort may be beneficial for regulating blood sugar levels and insulin levels. The herb may also help to prevent the accumulation of lipids in the blood and reduce blood sugar levels in people with type 2 diabetes or hyperlipidemia.

How to Use Chinese Mugwort (Ai Ye)

The recommended daily dosage of Chinese Mugwort is 3-10g. The herb can be taken orally or used externally.

Dried Chinese Mugwort is also often available in cones or sticks for moxibustion. Moxa sticks are widely available in herbal stores and acupuncture suppliers. Alternatively, you may find the leaves in Asian markets and specialty stores.

Cautions and Side Effects of Chinese Mugwort (Ai Ye)

Chinese Mugwort should not be used by individuals who are experiencing excess Heat in the blood, Yin Deficiency, or pregnancy.

For external usage, it is important to note that Chinese Mugwort may cause allergic reactions in individuals with sensitive skin as its volatile oils mildly stimulate skin, which may lead to fever or flush. Also, using Chinese Mugwort for an extended period of time may inhibit nerves, impair the Liver, nervous centralis or blood vessels.

Here is a summary for Chinese Mugwort (Ai Ye):